The world is has some 7.7 billion beautiful people. But in terms of images, infinitly more… Watch this video which shows an advanced application of GANs:

In this unit we overview some of the basics of GANs, a new branch of deep learning that emerged out of a 2014 paper by Ian Goodfellow et. al.

Generative modelling is an unsupervised learning task in machine learning that involves automatically discovering and learning the regularities or patterns in input data in such a way that the model can be used to generate or output new examples that plausibly could have been drawn from the original dataset.

Logistic regression and the classification and regression neural networks we have used up to now are discriminative. However, some classic machine learning methods are generative. A notable generative model to quickly review is the naive Bayes classifier:

Note that naive Bayes is not a Bayesian method.

The Naive Bayes algorithm is not related to GANs or deep learning, but is a classic machine learning (generative) algorithm that is worth knowing.

The naive Bayes algorithm aims to produce a classifier such that with a new observation \({x} \in {\mathbb R}^d\), we have a prediction for the label \(y\). Learning is carried out by estimating \(\hat{\theta}\) from the training data. Then in production/test time, with \(\hat{\theta}\) at hand, prediction is as follows,

Naive Bayes of this sort (and generalizations) has been very popular in e-mail spam detection based on a bag of words summary of the document in question.

Generally, Adversarial machine learning is the collection of techniques that attempt to fool models by supplying deceptive input. Adversarial training includes a variety of methods and applications, many of which are aimed at improving the quality of classifiers or at the same time exposing vulnerabilities.

A famous example is in this video:

More details are in this paper:

In the context of GANs, we harness the “adversarial” nature of two sub-models which we train.

It is ‘different’ from Naive bayes or density estimation methods which attempt to learn about \(p(X,Y)\) directly. A somewhat different type of generative model does not learn about \(p(X)\) or \(p(X,Y)\) but rather learns of a mechanism to generate samples of \(X\) or \((X,Y)\) that follow the same (or similar) distribution to the data. Generative Adversrial Networks (GANs) are such models.

Here we discuss the data as only \(X\), but later we can expand to \((X,Y)\). The basic idea of a GAN is to simultaneously create two models, a generator (\(G\)) and a discriminator (\(D\)). The role of \(G\) is to be a generative model which can transform noise samples \(Z\), (not having any information) also called latent space, into examples of \(X\). The role of \(D\) is to act as a binary classifier between “generated samples” \(G(Z)\) and real samples \(X\). The basic output of training a GAN is \(G(\cdot)\), the generator. In contrast the discriminator is there helping along the way, but is eventually “useless” because once \(G(\cdot)\) is good in generating samples, \(D(\cdot)\) cannot classify between a randomly generated sample \(G(Z)\) and a data sample \(X\).

The generator \(G\) works on noise vectors from the latent space to create “fake samples”. The discriminator aims to discriminate between real samples of the data and fake samples. The training of \(G\) and \(D\) is simultanious where eventually \(D\) cannot distinguish between “real” and “fake”. In training \(G\) and \(D\) we want an objective that will motivate \(G\) to create better samples and at the same time improve \(D\) in detecting if a sample is from \(G\), or is alternativly a real data sample. To formulate this object lets make use of the two probability distributions that are at play:

Since by now there are several other GAN formulations (see below), this type of original GAN formulation is these days refered to as vanilla GAN. This is the basic GAN formulation, formulated as a mini-max game and if we found parameters \(\theta_G\) and \(\theta_D\) such that achieve the “saddle point” \(\min_G \max_D V(D,G)\), then we have trained the GAN.

Achieving the idealized \(\min_G \max_D V(D,G)\) can be obtained approximately via basic iteration of stochastic gradient descent where \(G\) and \(D\) are trained jointly. The basic algorithm (still from the original GAN paper) is as follows: 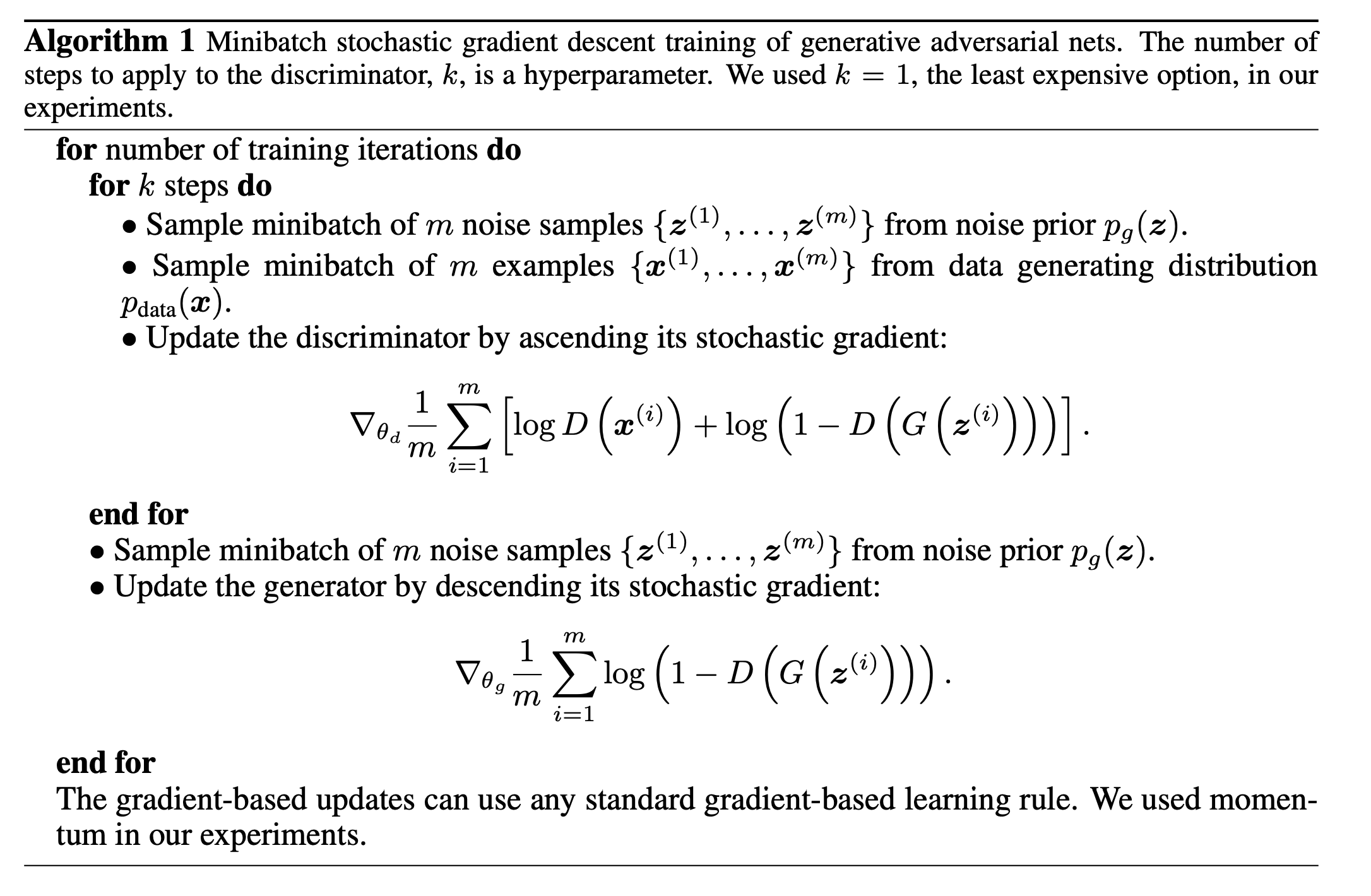 Minibatches of size \(m\) are used to train both the discriminator and the generator. There is an option to carry out \(k\) discriminator training iterations for every training step of the generator, however (more) recent empirical evidence generally shows that there isn’t typically a need for this.

Here are the first ever published images generated by GAN experiments from the original 2014 paper.

The rightmost yellow highlighted images are from the actual dataset closest to the GAN sample left of it. They are there to ‘show’ that these GANs did not memorize the data. 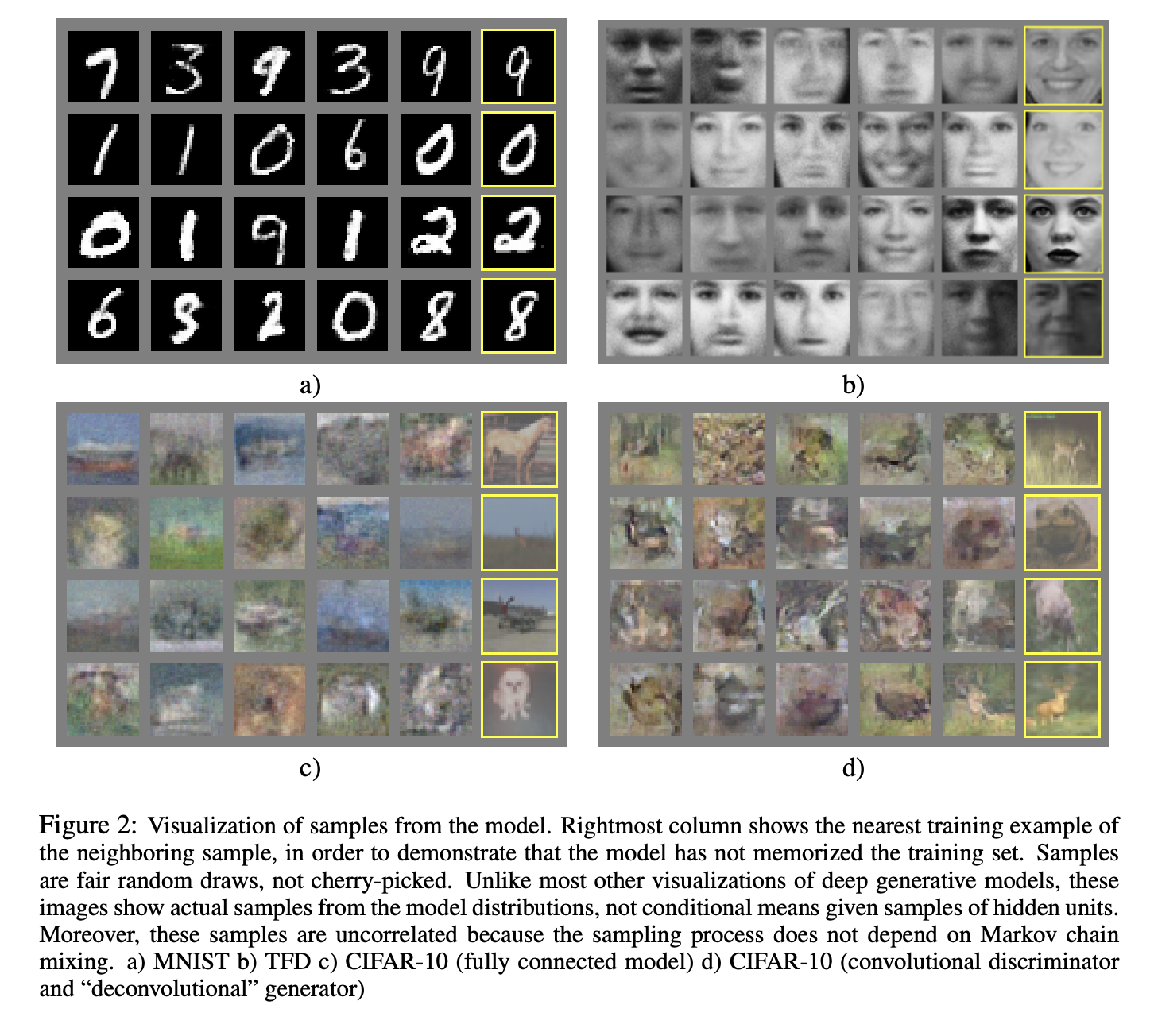 GAN Lab is similar to the well know Tensor Flow Playground with which you might have played around previously. Before we dive into more examples and details, let’s play with the wonderful online GAN visualization/simulator, GAN Lab. Here is one visualization from GAN Lab:

An animation from GAN Lab live on your browser

The use of the “latent space”, also sometimes just called a “feature vector” is a very powerful technique sometimes related to auto-encoders. More on this is in the sections below and the next unit dealing with sequence data.

Having an image represeted via the latent space is very powerful. What happens if you slightly perturb the \(Z\) in the latent space? What if you interpolate between two images?

Lets get a feel for such perturnabtions of the latent space by playing with a very simple analogy (almost too simple). Say we have data from a univariate exponential distribution with mean \(1\).

If we were to somehow have a generative model for generating \(x\), what would it be?

One general method for generating (Monte Carlo sampling) a random variable from effectively any uni-variate distribution is the inverse probability transform. Say the CDF (cumulative distribution function) of \(X\) is \(F(x)\) (and for simplicity assume it is continuous). The inverse CDF is denoted \(F^{(-1)}(u)\) (it is the quantile function). If we take a uniform \([0,1]\) random variable, \(U\), then the random variable \(F^{-1}(U)\) will be distributed with CDF \(F(\cdot)\).

Now if we perturb the value \(U\) in the latent space slightly then \(X\) will be perturbed slightly also! The same happens with the images perturbations on higher dimensional latent spaces as well, it is simply that the latent variable \(Z\) is a vector and the generative model \(G(\cdot)\) is (much more) complicated than our \(-\log(\cdot)\) function.

7.4 A tour of GAN evolution

Since the (quite recent) original 2014 GAN paper there has been huge progress on GANs, here is a very partial quick tour of some advances. See also the GAN ZOO which presents links to dozens of key GAN papers - an evolving list.

The original GAN was generative with respect to \((X)\) with CGAN we also consider the labels \(Y\). 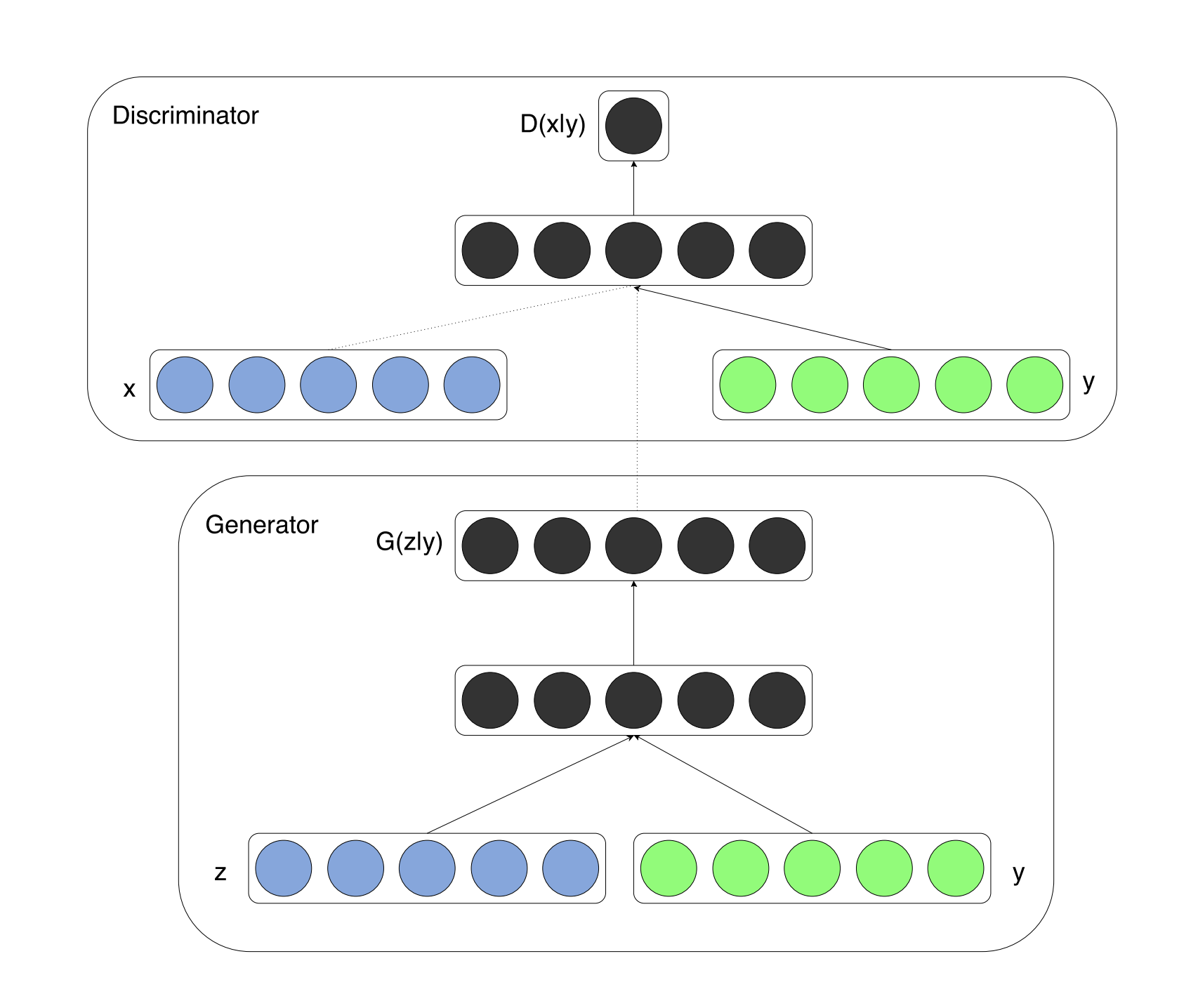 Taken from the 2014 CGAN paper 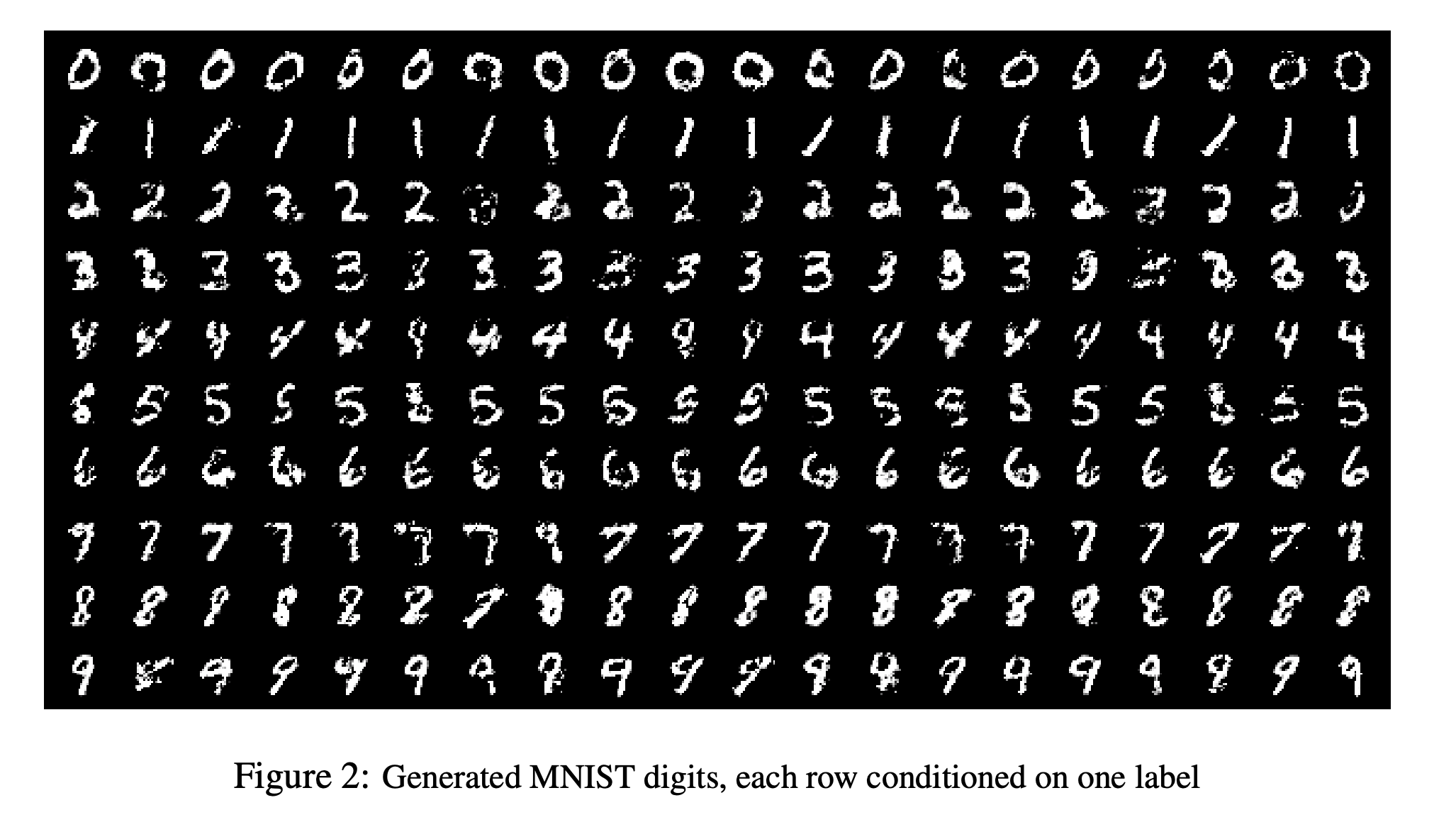 Taken from the 2014 CGAN paper

The original GAN used fully connected networks. But it is very sensible to use convolutional networks 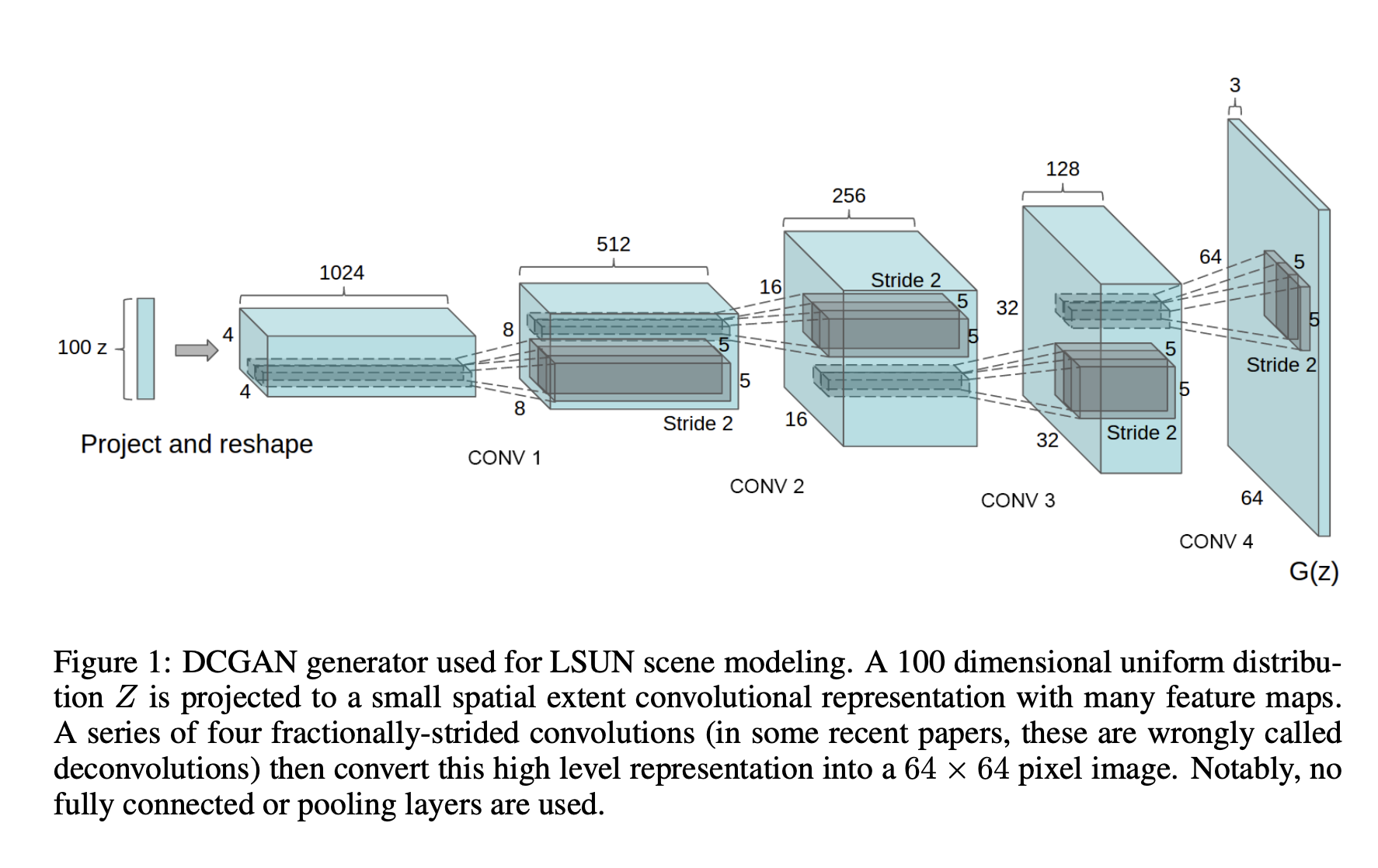 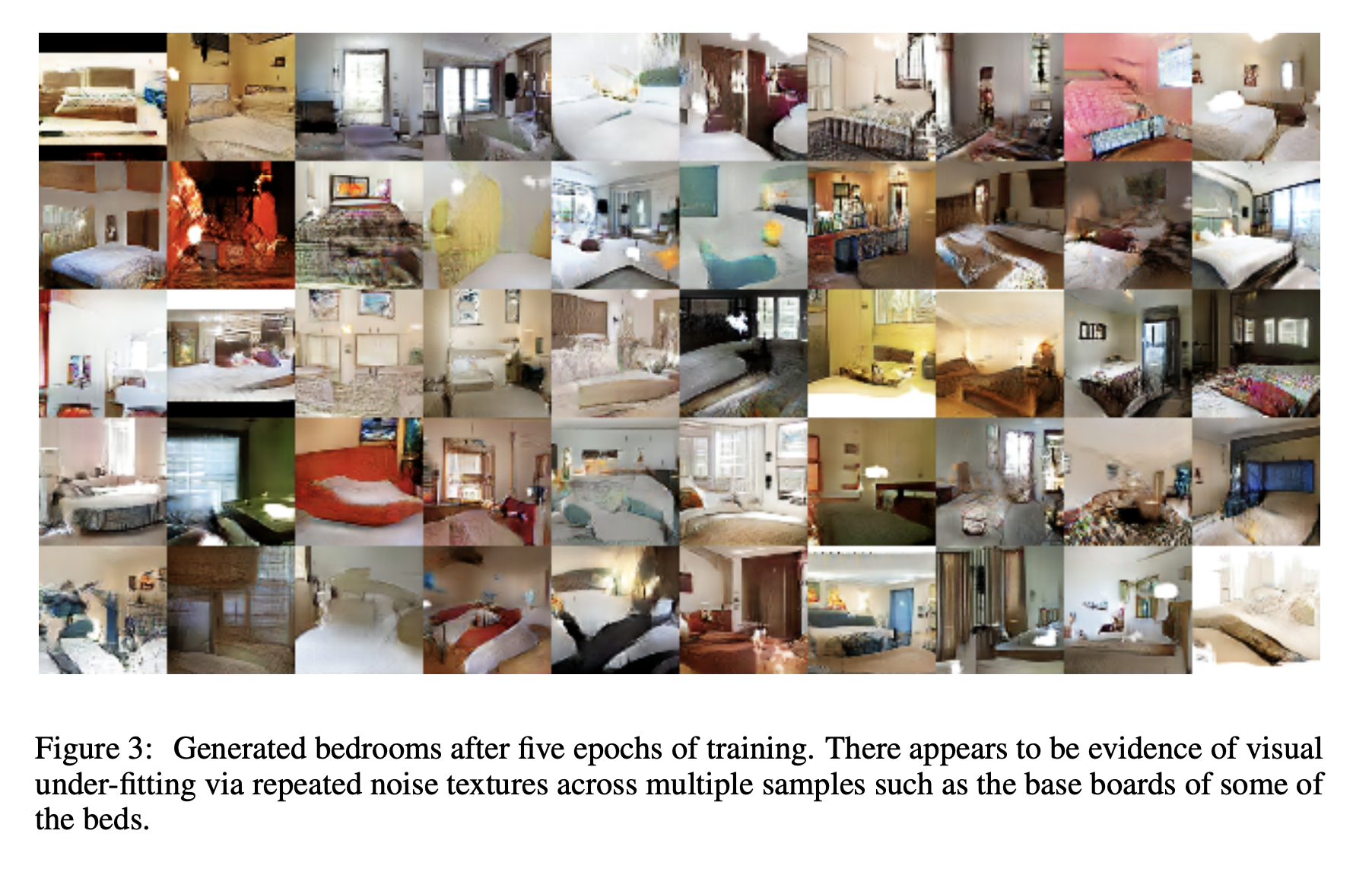 This hints that there may be meaningful semantics in the latent space.

The strength of the latent space is further demonstrated. 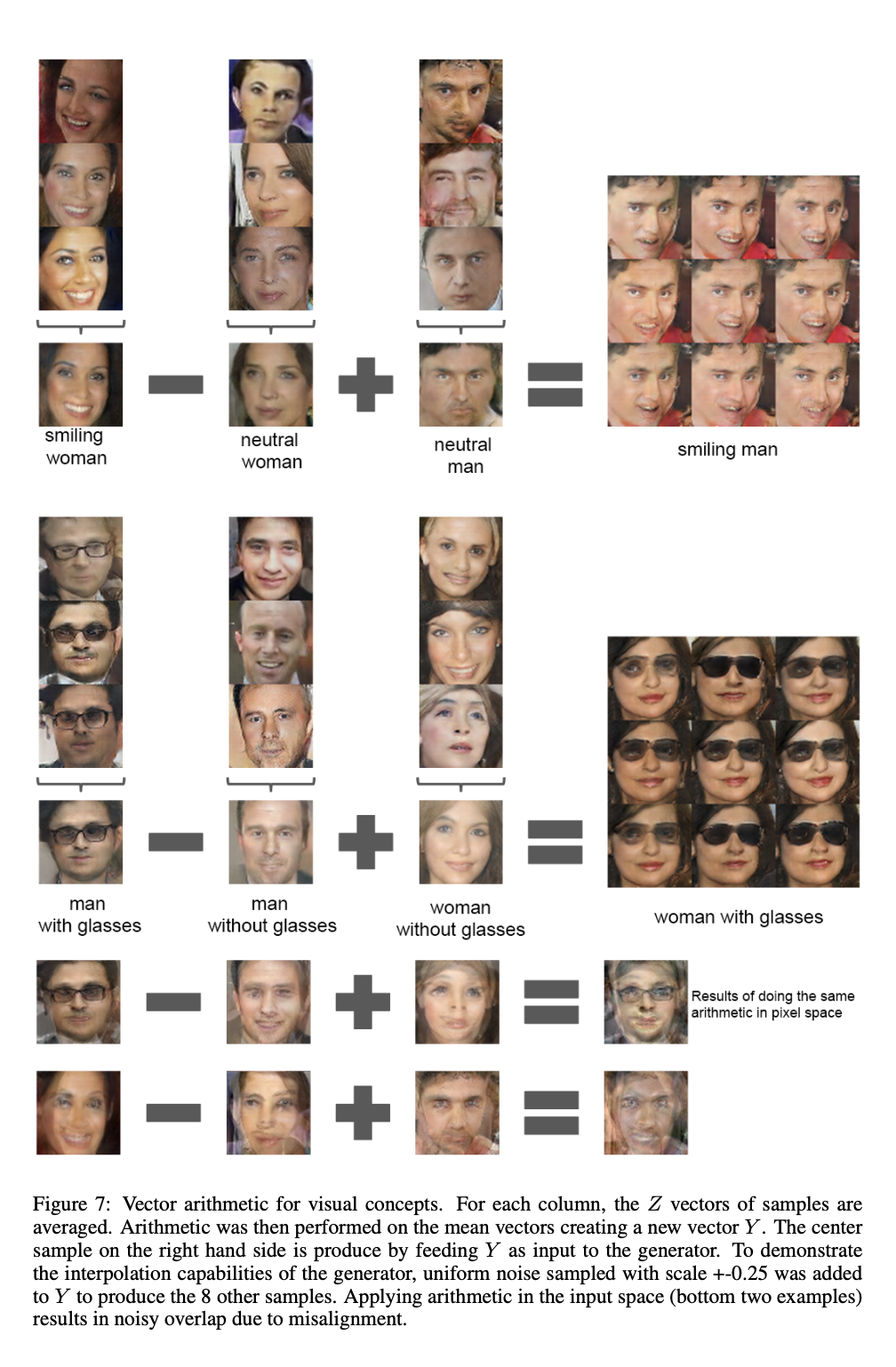 It took a while to generate ‘ImageNet like’ (quality) images. It is now doable. Note that this 2018 work relies on a combination of large and well-managed compute, and several other mathematical advances along the way.

See the video at the top of this unit. 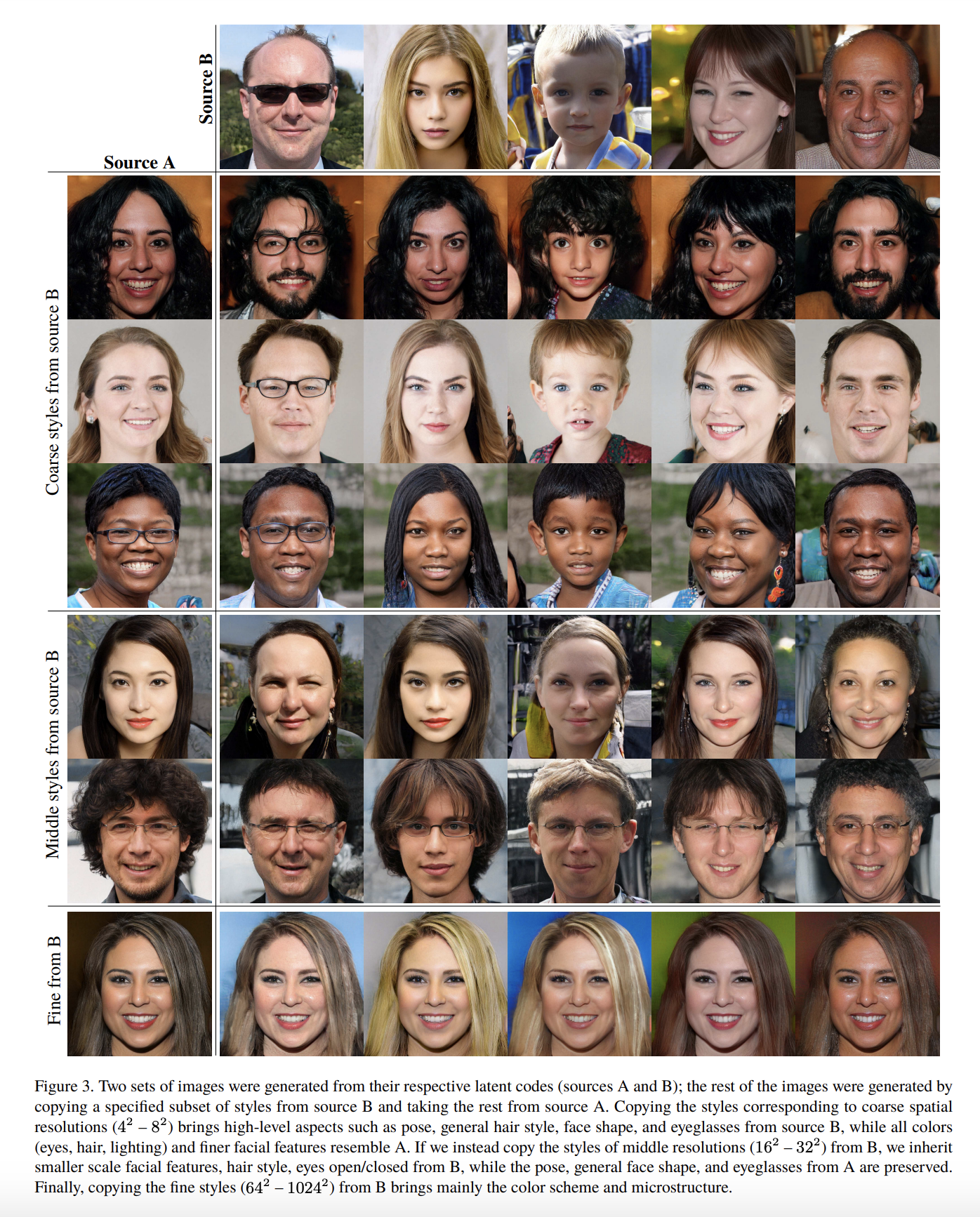 Taken from the 2019 Style GAN paper 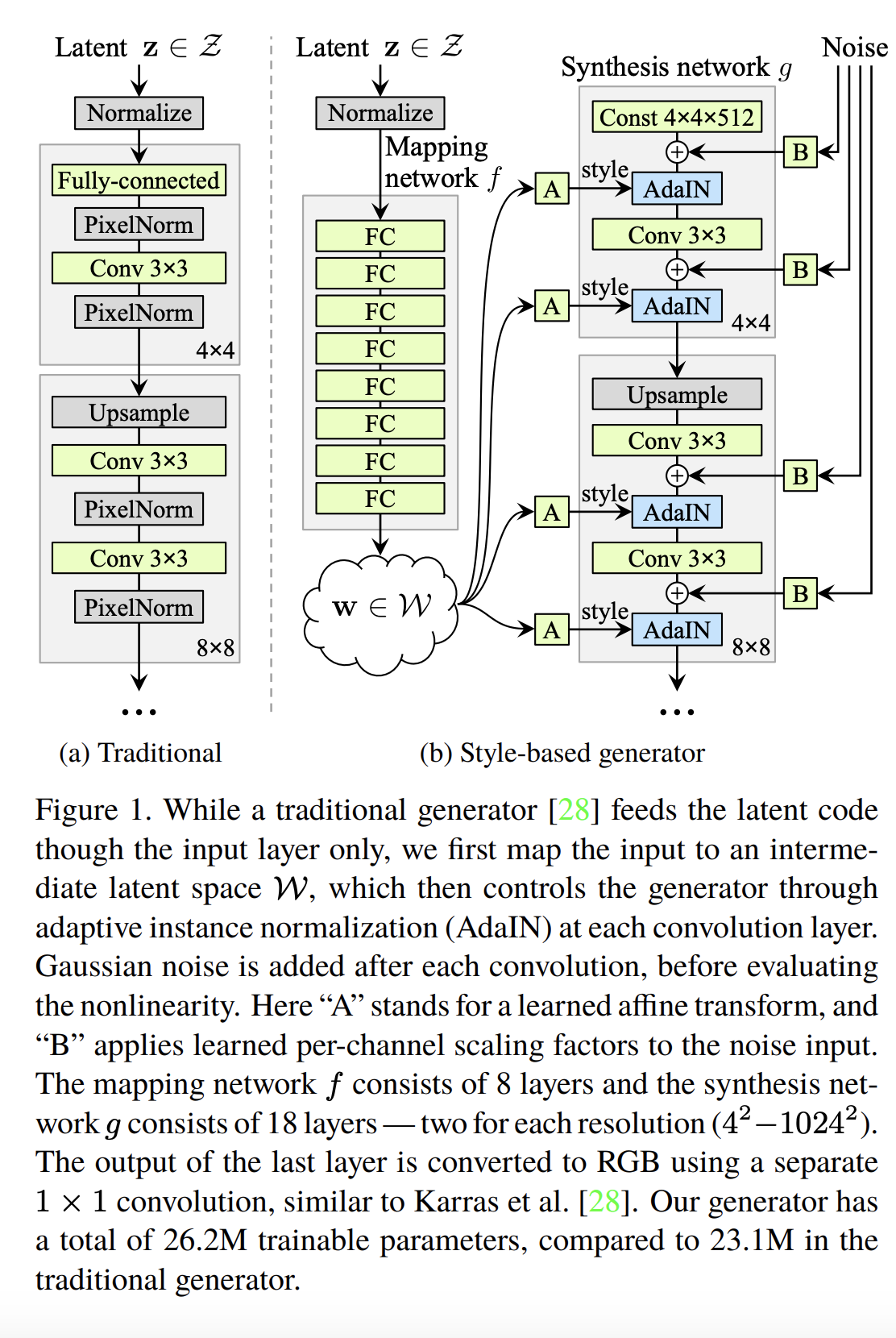 Taken from the 2019 Style GAN paper

The Jensen-Shanon (JS) divergence also measures similarity between two probability distributions. It is defined as follows:

Here are some properties of the JS divergence:

To see this observe that for fixed \(G\), the objective of \(D\) is to maximize,

While the game has a theoretical equilibrium, in practice we may sometimes not converge to \(p_g = p_{\text{data}}\). This is sometimes called mode colapse. There are several possible reasons for this:

We focus on the last bullet point by modifing the value function, as described below.

We will focus on the Wasserstein GAN initially presented here:

Below are key snippets from the 2017 WGAN paper where some theoretical justification for using the Wasserstein GAN are presented.

7.6.1 Some basis for the Earth Mover (or Wasserstein) distance 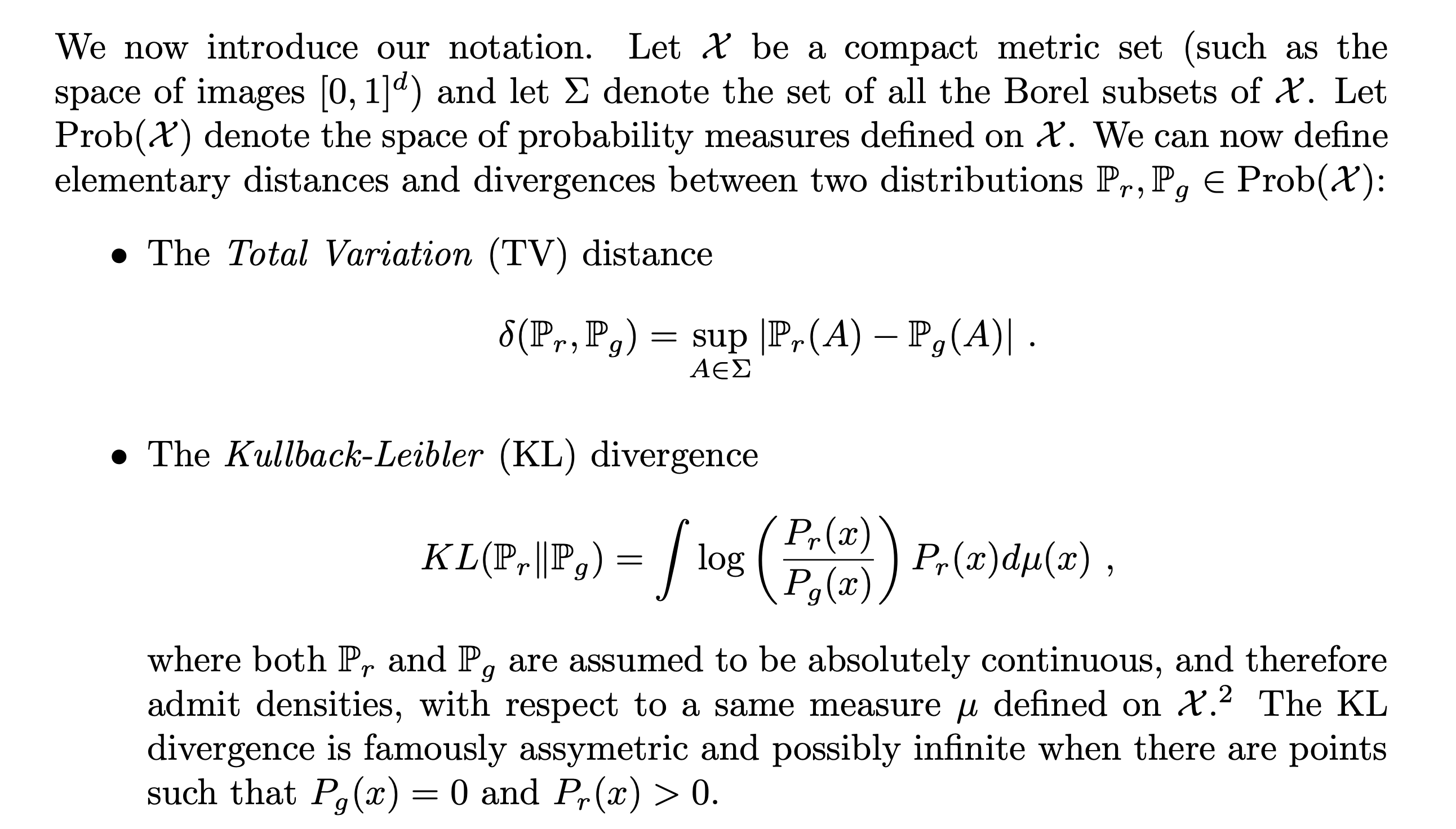 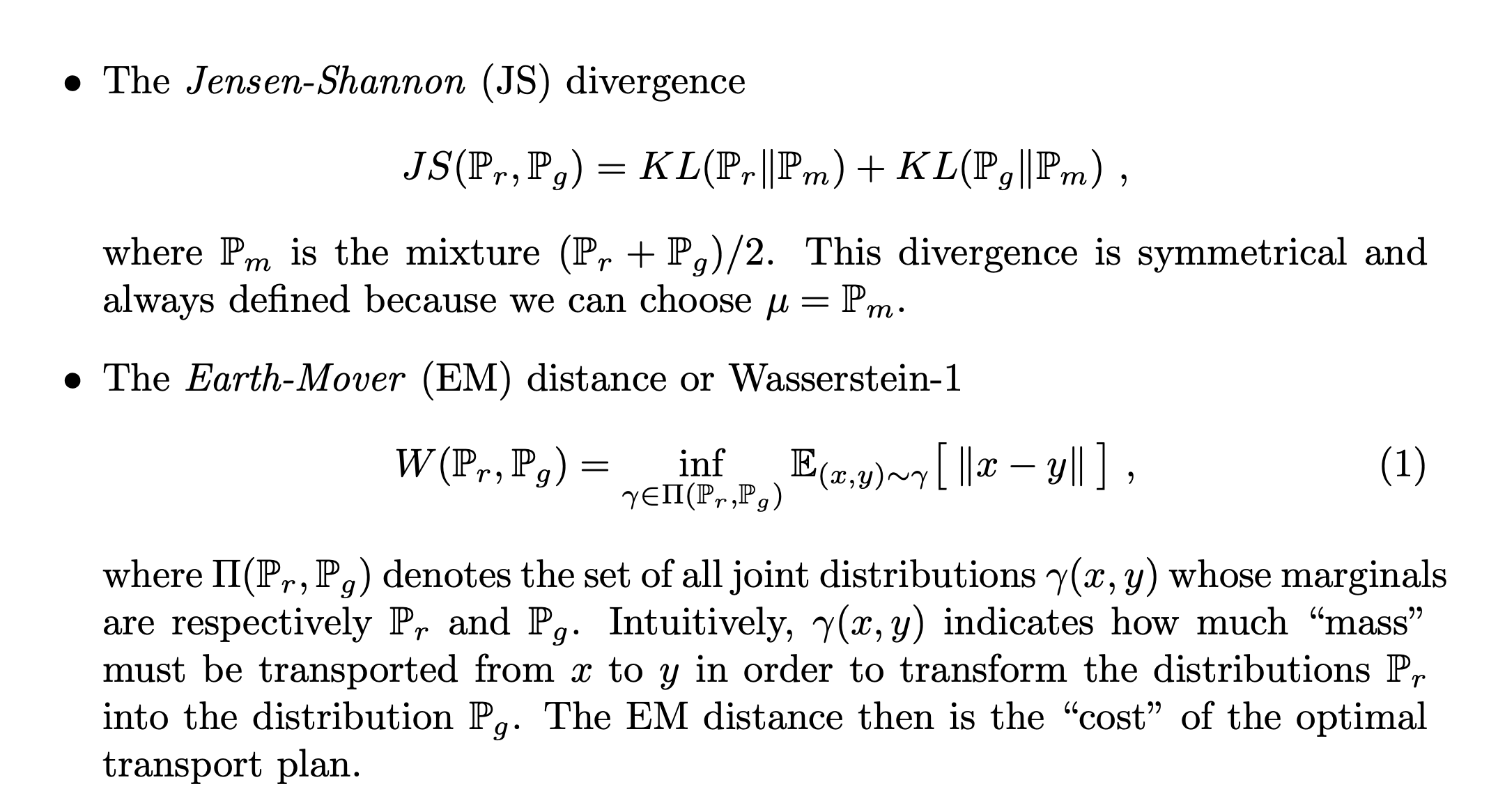 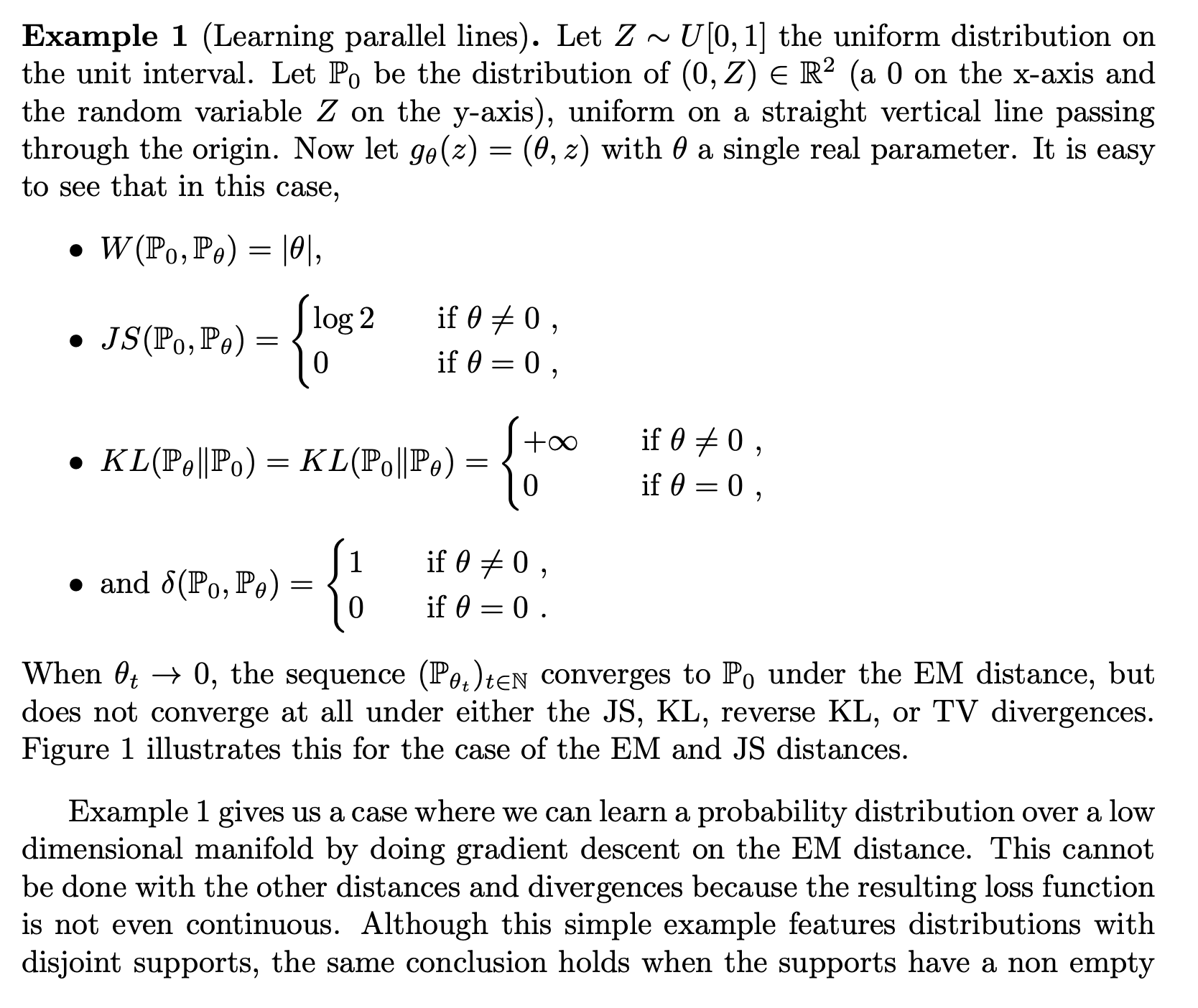 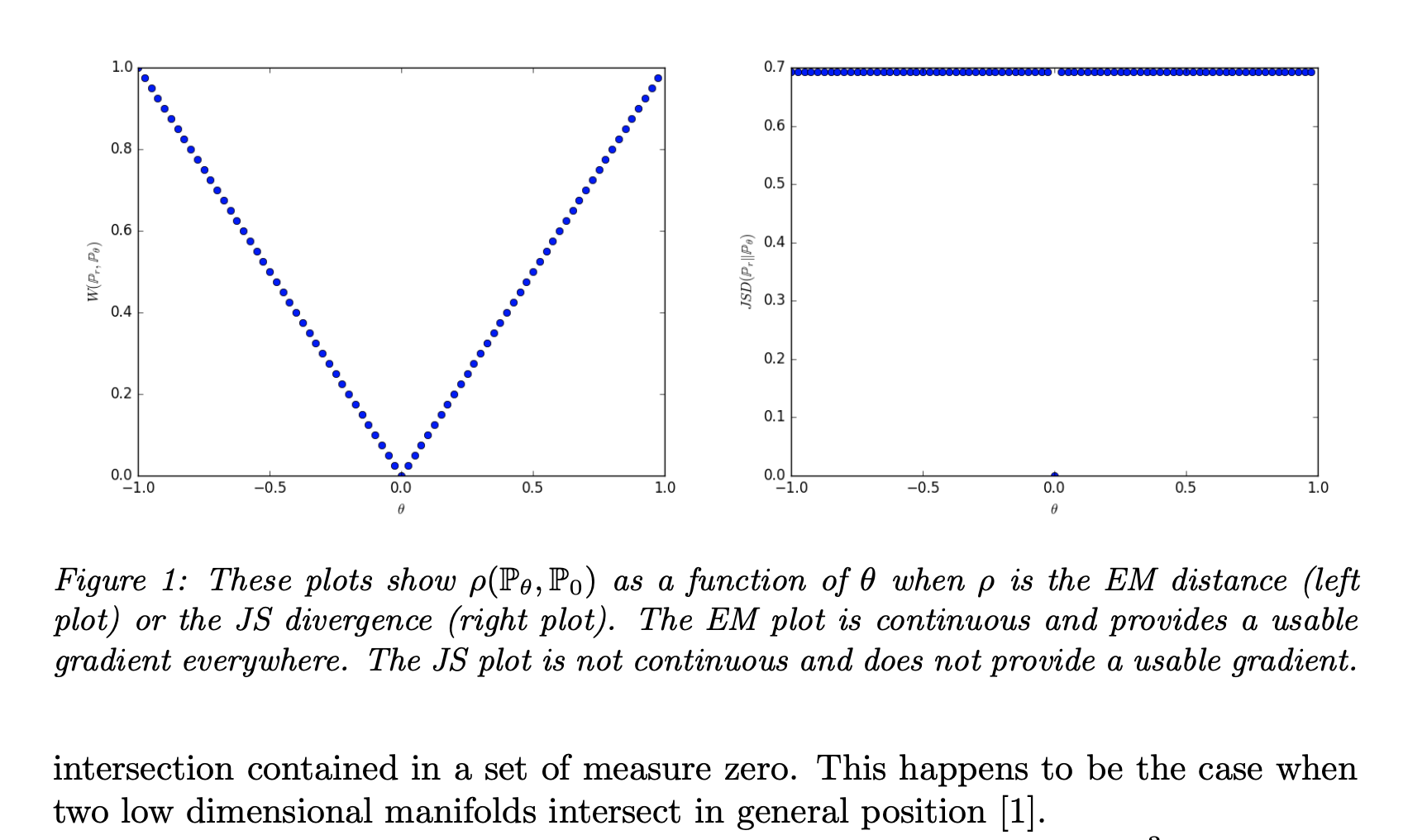 The infimum in the Wasserstein distance,

is highly non-attainable. However, the Kantorovich-Rubinstein duality tells us that,

It still isn’t easy to compute this metric, but it inspires using the discrimentator \(D(\cdot)\) as \(f(\cdot)\). Note that now the discriminator is not longer a binary classifier. Hence the WGAN objective is

There is the problem of how to deal with the constraint, \(: ||D||_L \le 1\). A crude (first) way to do this is via clipping. Here is the algorithm from the WGAN paper 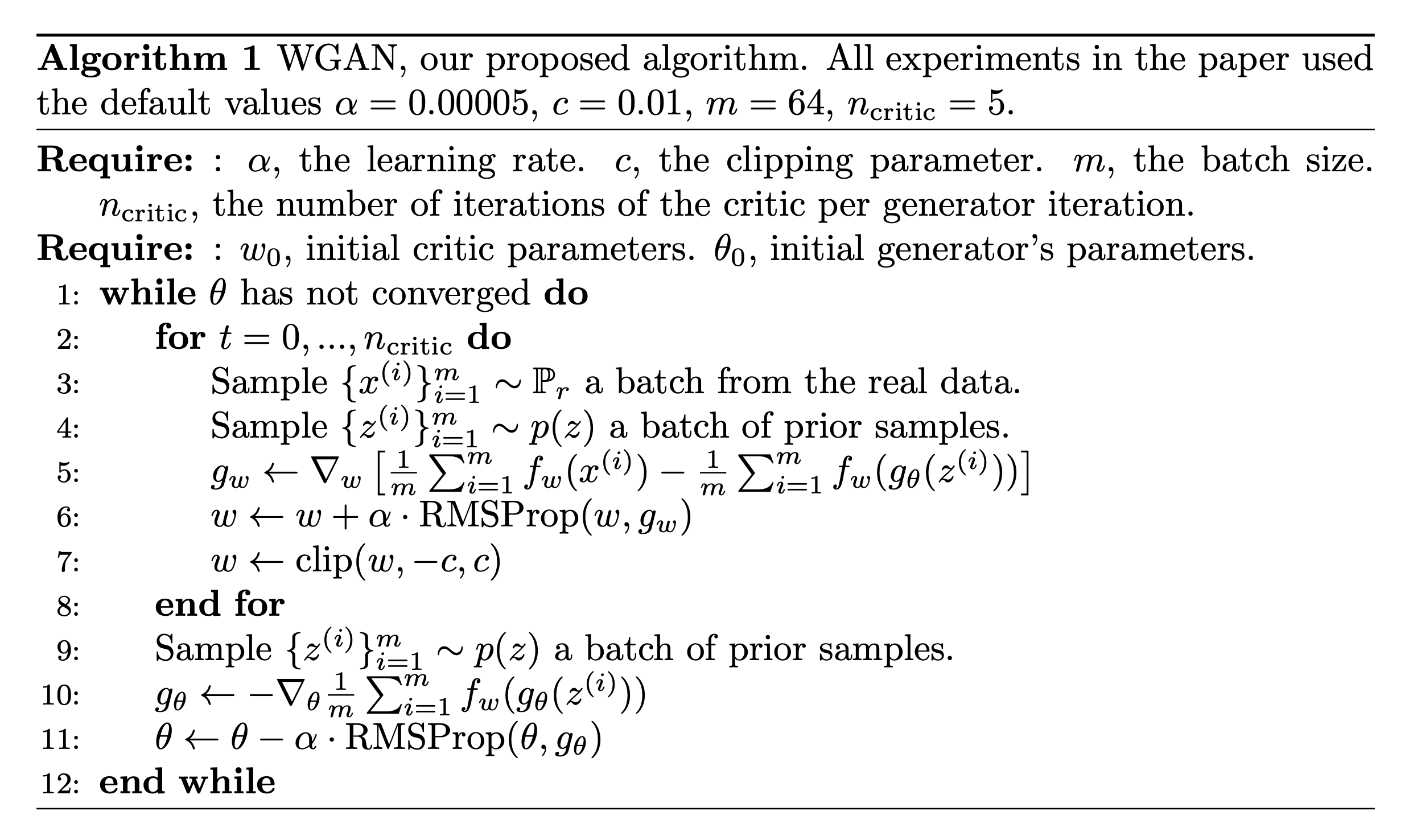 Taken from the WGAN paper

Here are comments also taken from the WGAN paper: 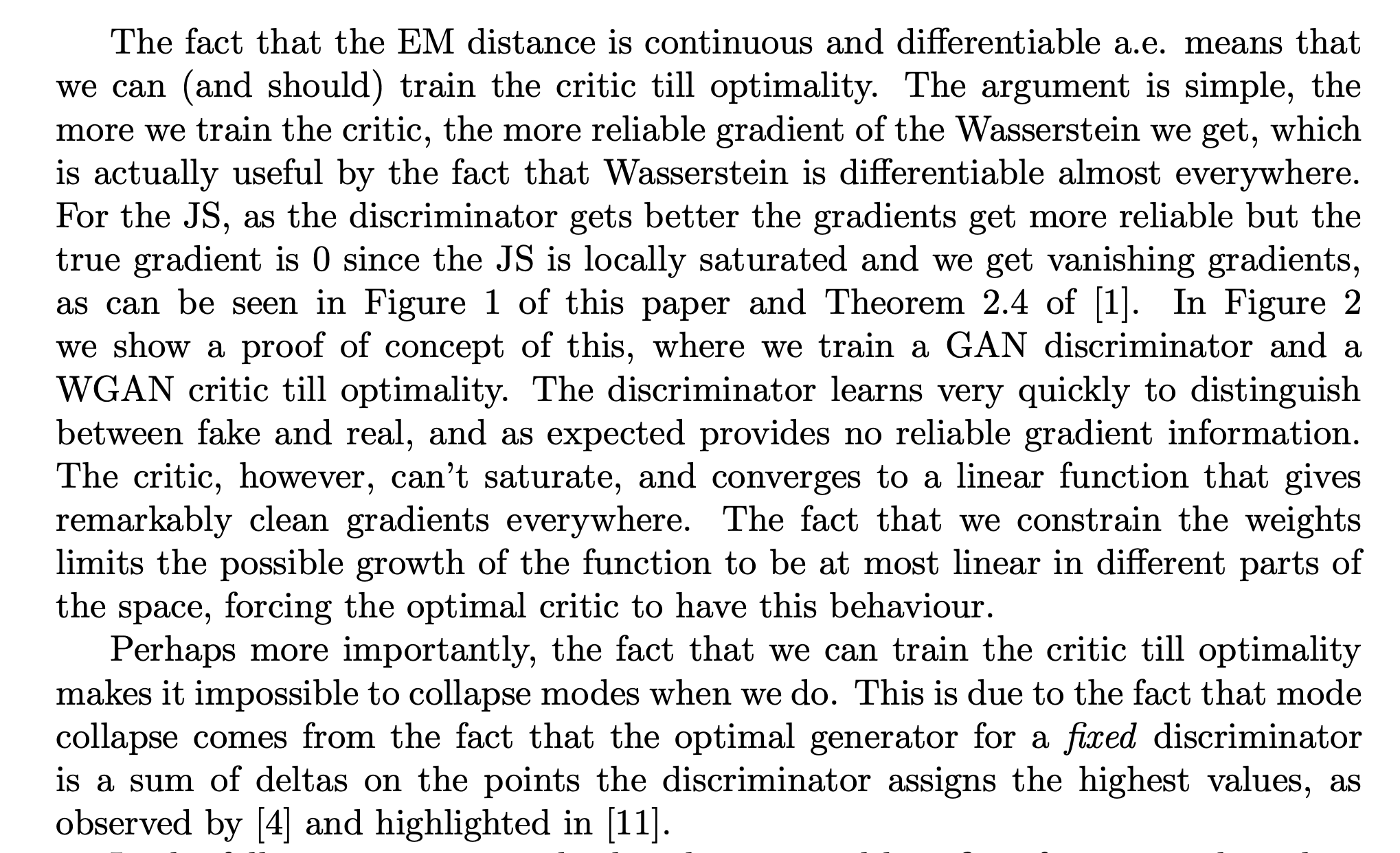 It isn’t obvious how to evaluate the performance of a GAN. Here are some current methods:

Taken from that paper:

For a definition see:

See for example this blog post. These are some of the applications of GANs:

This is still an evolving field. This (quite recent) talk by Ian Goodfellow presents an overview of GANs and the evolving applications:

However we must also acknowledge that there is significant danger with GAN technology, specifically dealing with DeepFakes. Deep fakes pose not only political danger but also private danger. See for example this video:

they are more resilient to vanishing gradients